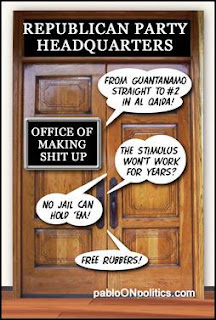 By Ian Millhiser Sens. Jim DeMint (R-SC) and John Ensign (R-NV) announced yesterday that they would invoke an unusual Senate procedure — a “constitutional point of order” — to allow the Senate to rule by majority vote on whether the “Democrat health care takeover bill” is unconstitutional.

Sadly, DeMint and Ensign’s attempt to change the meaning of the Constitution by invoking a constitutional point of order is an all too familiar tactic. As CQ reports, Republicans often invoke this procedure to claim that bills they don’t like must therefore be unconstitutional. Sen. Tom Coburn (R-OK) recently invoked the procedure to claim that a $200,000 federal grant to an Omaha, Neb. museum somehow violated the constitution. Sen. John McCain (R-AZ) used it to protest a bill to enfranchise D.C. residents.

Raising a constitutional point of order is also the first step to invoking the so-called “nuclear option,” an elaborate set of procedural maneuvers Republicans dreamed up while they were still in the majority, that effectively declare the filibuster unconstitutional. Indeed, despite the fact that Ensign and DeMint now claim the right to filibuster anything the majority does, both senators believed the filibuster must be unconstitutional when it was being used against them. Ensign claimed that the Senate has a “constitutional obligation” to give President Bush’s most radical judicial nominees an “up-or-down” vote, and DeMint had even harsher words for Democratic senators who opposed majority rule:

The obstructionists should go to the Senate floor, make their arguments, allow senators to draw their conclusions on her nomination and then let us vote. If their arguments are so strong, they should be able to convince a majority to agree. Otherwise, they are simply smearing the integrity of a highly respected jurist to score political points against the president, at the expense of vandalizing the Constitution. . . .

There is a reason Americans elected George W. Bush and a large Republican majority in Congress. The majority of Americans trusted our judgment on judicial nominees. There is also a reason Democrats are in the minority. Most Americans did not trust them to make these decisions.

Now that DeMint and Ensign are in the minority, however, it simply must be the case that the Constitution protects minority obstructionism–and that bills opposed by the minority are unconstitutional.