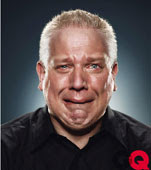 By Sahil Kapur In New York, Beck sold 17 tickets. In Boston, another 17. And in Washington, D.C., the hotbed of political activism, his tearful film drew only 30, Raw Story has found.

Glenn Beck's new movie The Christmas Sweater – A Return To Redemption -- released for a viewing Thursday night in hundreds of theaters across the country. While it performed better in the south and in rural, more conservative areas, his ability to draw viewers in major US markets was a bust.

"The theater's almost empty," a representative at Regal Cinemas in Manhattan told Raw Story moments before it began.

The flick features the firebrand Fox News host sharing with willing souls his most profound childhood memories, along with his philosophies on life, love and happiness.

"It is the story of faith, tragedy, redemption and hope," Beck says in the trailer. (Reporter's caution: he cries in it.) Beck's Mount Vernon hometown -- sold out several hours before the show began. Ten miles south, 70 out of 415 seats had been snagged in Seattle, a better turnout than other cities.

All attendees were charged $20 -- a figure that Beck surely hoped was affordable for the "little guy," who he often claims to stand up for.

Unsurprisingly, the movie appears to have performed better in rural, conservative areas. Shortly before it began, the show in the small town of Rockwall, TX had 94 ticket-buyers out of a possible 193. One-hundred seventy seats were taken in the suburban West Jordan, UT.

"The tale’s message of redemption literally changed people’s lives, bringing many back from the brink of collapse and restoring family relationships," read the description of Beck's similarly titled book, upon which the movie is based.

In the film, Beck talks about the inspiration for his 2008 memoir, explains the "overwhelming response" he received from fans, and introduces watchers to some formerly troubled souls who say it touched and changed their lives forever.

To the pleasure of his most die-hard fans, he even reads from it.

The movie runs 2 hours and 15 minutes, and a full repeat of Thursday's agenda will be offered one week from the showing.