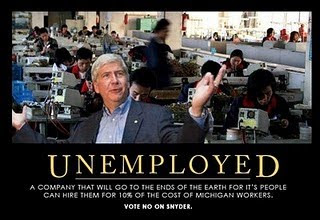 Last November, Michigan Gov. Rick Snyder (R) won a decisive 18 point victory in his race for the governor’s mansion. Yet after less than three months of draconian budget proposals andunconstitutional assaults on collective bargaining, Snyder is hurting. A new poll finds that Snyder would lose his election if it were held today, and that a strong plurality of the state would supportamending the state constitution to prevent Snyder from continuing his anti-union agenda:

M.C.L Comment: I've told people don't let that " I just want to help" bullshit fool you because there is a reason he's running on the Republican side. And now you see why he avoided debates especially those with Virg Bernero because that fluffy marshmallow rhetoric he spew in his ads wouldn't help him in the debates where he had to tell people how he's going to balance the budget and what were his priorities in detail. And you see what the media that enable his victory is trying to do, they're either not talking about what Snyder wants to do or if you're Huel Perkins or Timmy Skubick you spin it.

Rachel Maddow and Randi Rhodes had did more reporting on Snyder's budget and his EFM scam than the entire state of Michigan media combine.