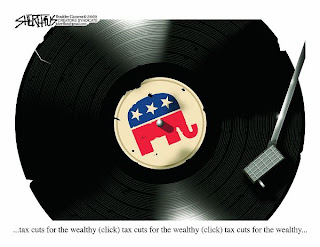 In the last week or so, a dizzying array of Republicans have made it their official stance that $33 billion to extend unemployment benefits must be fully paid for, but financing a $678 billion extension of the Bush tax cuts for the wealthy with deficit spending is just fine. “I think we need to be paying for all the spending that’s going on,” said Rep. Michele Bachmann (R-MN). “But when people can keep more of their own money that shouldn’t be considered a cost.”

Today, Sen. John Barrasso (R-WY) tackled this topic and started to go down the same road as the likes of Bachmann and Sen. Jon Kyl (R-AZ), who was the first to set foot in this fiscal fantasy land. But he then pivoted to suggest that the Bush tax cuts for the wealthy should be funded with unspent stimulus funds:

Q: Are you for extending the Bush tax cuts to the wealthiest Americans, yes or no? [...] Are you paying for them? Or are you for adding to the deficit to continue those tax cuts?

Barrasso: There is so much unspent stimulus money that we ought to use that in a responsible way, which is to help keep taxes low.

This is problematic on two levels. First, it’s simply not true that there’s “so much unspent stimulus money” just lying around.

According to the latest data, there is $362 billion in stimulus funding waiting to be allocated (see chart at right), so Barrasso is still $325 billion short of the money he would need to cover the $678 billion cost of extending the Bush tax cuts for just the richest two percent of Americans.

And a longer look at the chart reveals that $125 billion of the unallocated funding is already dedicated to tax cuts. Remember, despite conservative’s constantly portraying it as only federal spending, the stimulus cut taxes for 95 percent of Americans. So Barrasso’s plan to repeal the money amounts to a tax increase on the lower- and middle-classes, which Barrasso wants to then turn around and spend on tax cuts for the rich.

Barrasso didn’t explicitly call for raising taxes on the poor and middle class in order to pay for his preferred policy outcome (which is tax rates for the wealthy that are as low as possible), but that’s what his suggestion would do. A similar sentiment was made far more directly by Wall Street Journal Editorial Board member Stephen Moore, who called for raising the rate of the lowest tax bracket in order to bring down tax rates for the rich.